The extremely talented artist and calligrapher, Donald Jackson, had a lifelong dream. He wanted to write and illuminate the entire Bible in the way that it used to be done before the printing press was invented. But he needed a sponsor for such an ambitious project. He found the help he needed from a group of monks located in central Minnesota, St. John’s Abbey and University, Collegeville, MN. And so was born the project that came to be known as the St. John’s Bible (SJB).

On Ash Wednesday, 2000, Mr. Jackson penned the first words of this monumental work, the opening verse of Genesis, the first book of the Bible, “In the beginning, God created the heavens and the earth.” Eleven years and 1,150 handwritten pages later, the six calligraphers and dozens of other artists and consultants who worked on the project were done. 500 years had passed since anything like this had been created.

To make the SJB accessible to more people, 299 full-scale “Heritage Edition” copies of the Bible were produced and have been circulating around the world at various libraries and centers of learning. What follows are some of the pictures I took of the Heritage Edition of the SJB that is currently on display at Concordia University, St. Paul, MN. 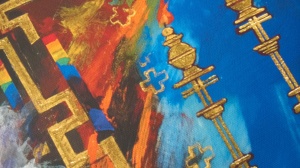 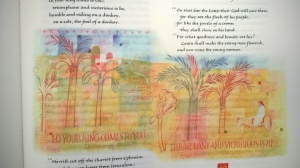 Illumination of Zechariah’s prophecy that Jesus fulfilled on Palm Sunday when he rode into Jerusalem on a Donkey. 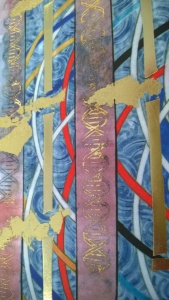 Detail of the illumination of Jesus’ family tree as recorded in the Gospel of Matthew. The illuminators embelished the family tree with strands of DNA! There are many instances like this in the SJB where the artists connected the Biblical text with modern realities. 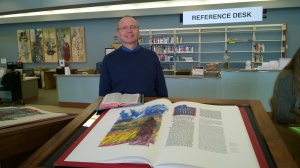 This is me with my own personal Bible sitting next to one of the seven volumes of the Heritage Edition. I thought it would make a good picture to have a modern Bible that was mass produced in some factory by the thousands sitting next to a hand-written masterpiece.

Here is my Bible again, hanging out with the illuminated Ten Commandments from Exodus 20.

Another common feature of the SJB is the appearance of these ghostly, shadowy figures, a reminder that the Holy Spirit is always present when God’s Word is in use.

This is the illumination of one of the most fascinating chapters of the Bible, Proverbs 8, which speaks of God’s Wisdom in very human terms.

This is Ruth, one of the great women of the Bible, and great-grandmother of King David.

This is Queen Esther, another great woman of the Bible. She used her position as queen to save God’s people from extinction.

The contrast between the illuminations on these pages goes well with the text they illustrate, the story in Ezekiel 37 of how God’s holy Word gave life to a valley full of dead, dry bones. 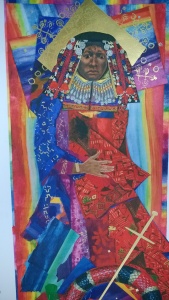 It’s hard to imagine a greater contrast between Luke’s account of the birth of Christ in Luke 2 and the dreadful account of Christ’s birth in Revelation 12. The murderous hostility that the devil and the world heaped on Christ throughout his life is reflected in the face of Mary, his mother, in this illumination of Revelation 12.

And here is the “Gloria in Excelsis” passage from Luke’s account of Christ’s birth in Luke 2.

Another example of how the artists used modern images to illuminate the text.

My travel companions, Anna Dauffenbach on the right, and her parents, Jeff and Jane. Anna is a student at Concordia Univeristy, St. Paul and shared with us a wealth of information about the SJB. It was great to see a young person get so excited about the Word of God. 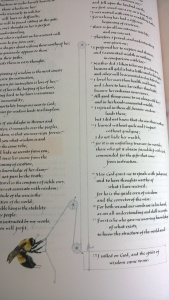 Mistakes were made! Even the most talented and careful scribes sometimes make mistakes. When this happened in the creation of the SJB they found very creative ways to “correct” them. Here a bumble bee with a pulley system is employed to get the words in the right place.

God’s holy Word ends on a high note with the last words of Revelation the last book of the Bible: “Surely I am coming soon. Amen, Come Lord Jesus! The grace of the Lord Jesus be with all the saints. Amen.”

If you ever get a chance to see the SJB don’t pass it up!