This past week was the district convention of the Minnesota South District of the church body to which I belong. Compared to the rest of the country, Minnesota is not thought of as a very diverse place but over the course of 24 hours at the convention I experienced a pretty impressive range of diversity.

At supper before the opening worship service I met a man from Sudan who is a member of Trinity Lutheran Church, Faribault, MN and who is preparing to become a pastor in our church body. At the opening worship service we sang a Spanish song from our hymnal called “Alabare”. I could tell that when we started singing most people were unfamiliar with the song but by the end of the song everyone was singing and many were clapping. The next morning I had breakfast with a pastor who serves a congregation in St. Paul, MN who is originally from Korea. On the way in to one of the convention sessions I ran into another person who had ties to Korea, a retired pastor who had been a missionary in Korea.

One of the speakers we heard that day was born and raised in the town of Nazareth in Israel. He is fluent in Arabic and is now a pastor in South Dakota. I also ran into a man who is making preparations to serve on the mission field in Nigeria.

And, to top it off, when we held elections we elected this man, Rev. Fungchatou Lo, who came to the US as a refugee from Cambodia, to the 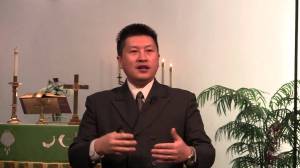 Board of Regents of Concordia University, St. Paul.

Being in the upper midwest our District is not in the most diverse part of the country. And the membership of our District is still overwhelmingly white. But still when we gather in convention there really is a lot of diversity to celebrate as members of the Body of Christ. And the Minnesota South District is one of 35 districts in our church body, The Lutheran Church – Missouri Synod, so across our Synod we have even more diversity.

One thought on “Diversity in the Body of Christ”