This week we feature research done by someone I actually know. Trevor Vannatta, whose parents are members of my church, is trying to figure out why moose are dying off in Northern Minnesota as part of his graduate work at the University of Minnesota – Duluth.

Turns out the giant liver fluke, a parasite that has a very complex life cycle that includes snails, excrement, and plants, may be the culprit. The giant liver fluke lives in both deer and moose. Apparently it is not harmful to deer but it causes pretty serious problems in moose. According to Trevor, the fluke is just one of many possible causes of the decline of the moose population that scientists are studying. 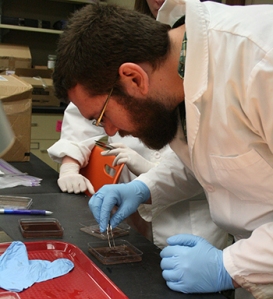 Trevor hard at work studying the flukes. His proud parents are the ones who told me about Trevor’s moose work.