Philippians 3:8–9 “Indeed, I count everything as loss because of the surpassing worth of knowing Christ Jesus my Lord. For his sake I have suffered the loss of all things and count them as rubbish, in order that I may gain Christ [9] and be found in him, not having a righteousness of my own that comes from the law, but that which comes through faith in Christ, the righteousness from God that depends on faith”

Here in October in Southern Minnesota, the harvest is underway. Our hard-working farmers are out in the fields gathering in their crops. As someone said, the farmer is the only person who buys everything for his business at retail prices and then sells his products at wholesale prices. May God grant everyone a safe and abundant harvest. Since it’s 2020, I’m sure there will be some surprises along the way.

When the crop harvest begins, our thoughts turn to the spiritual harvest that goes on 365 days a year, 24 hours a day, 7 days a week. The Holy Spirit does not rest. The harvest of souls is too precious to waste any time.

This year my October mission emphasis is going to look at four mission agencies affiliated with my church body, The Lutheran Church – Missouri Synod (LCMS). Those agencies are Orphan Grain Train, Lutheran Bible Translators, the Lutheran Heritage Foundation and POBLO.

According to the Orphan Grain Train website, Rev. Ray S. Wilke, pastor of Grace Lutheran Church in Norfolk, Neb., volunteered with a group of Lutherans who traveled to Latvia and Russia to help with a church mission in 1992. This was shortly after the fall of the Soviet Union and many countries that had been closed to mission work were suddenly opened up.

On this mission trip, Pastor Wilke met people in desperate need of spiritual, emotional, and humanitarian aid after the breakup of the former Soviet Union. The Latvians begged Rev. Wilke to help them more after he went home and he promised he would.

Wilke envisioned a train that would travel through America’s Midwest, picking up cars of donated grain along the way, until it reached a port from which the grain would be shipped to feed starving orphans in Eastern Europe.

Upon his return to the United States, Wilke contacted Clayton Andrews, president of Andrews Van Lines, a worldwide transportation company, and told his story. Together, they founded Orphan Grain Train.

As it turned out, railroad operating protocol made the original grain train concept impractical, but Orphan Grain Train was born nonetheless. Within a year Grain Train’s first shipment, a container of clothing and quilts, arrived in Riga, Latvia.

And today, 28 years later? Orphan Grain Train operates 27 warehouses across the country, all operated by volunteers.  Last fiscal year more than $65.5 million worth of humanitarian aid and food was shipped to people in need in the US and around the world. 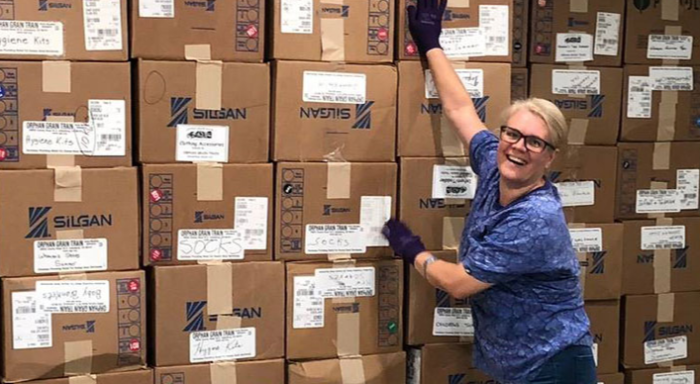 They also support a number of special projects they work on including pillow case dresses, sleeping mats, each crocheted from 500-700 plastic bags, and solar ovens.

Charity Navigator, America’s premier independent charity evaluator, awarded Orphan Grain Train four out of a possible four stars. This high rating indicates that Orphan Grain Train adheres to good governance and other best practices that minimize the chance of unethical activities and consistently executes its mission in a fiscally responsible way. Only 1.8 percent of donations are used for administration.

Orphan Grain Train is a recognized service organization (RSO) of  the LCMS. Many shipments have been in cooperation with Lutheran Hour Ministries, LCMS World Mission, LCMS World Relief, and other Christian ministries.

When we think of the regular harvest it involves gathering the crop into the storage bin and then sending it to market. As the story of the Orphan Grain Train illustrates, the spiritual harvest works the opposite way, it almost always starts by giving things away. 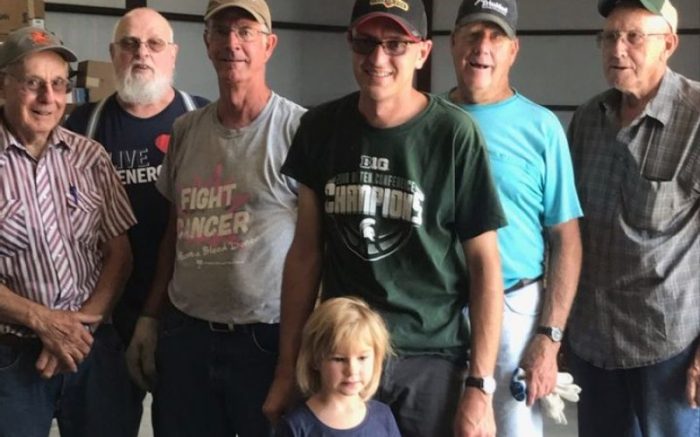 It starts with people who realize that God has freely given us salvation in Jesus Christ. As Paul says above in his letter to the Philippians, the salvation we have in Christ is our most treasured possession. All other things are counted as loss for the sake of knowing Jesus Christ.

Then those of us who know about God’s gift of salvation in Christ give things away which then leads to opportunities for people to be open to hear about the best gift of all, the gift of life and salvation in Jesus Christ.

So let’s apply that to our own lives. What can we give away that might open the door to a harvest in the Lord’s kingdom? It doesn’t have to be a truckload of food or clothing. It can be much smaller but that’s how it starts.

And as with the folks who started the Orphan Grain Train, things almost always turn out differently from the way we plan. But still it is a great privilege to be part of the harvest of souls that never stops.