Marshal was founded in 1837 and named after John Marshall, the fourth chief justice of the US Supreme Court.

A partnership between Marshall University Forensic Science Center and local Huntington police that involves testing rape kits and checking DNA against the Combined DNA Index System or CODIS. has led to the arrest of a man for a sexual assault that happened 12 years ago. This is just a start since there is a huge backlog of rape kits around the country.

Here is a link to the Marshall University “Creek Geeks” who study the health of the numerous creeks in the hills and mountains around Huntington.

Researchers at Marshall’s School of Medicine have proven the efficacy of new test for thyroid cancer, thus reducing the need for biopsies.

Marshall University endured the worst aviation disaster in sports history in November, 1970 when 75 football players, coaches, staff members and booster died in a plane crash. 13 straight season of football futility followed until the year 1984 when they had their first winning season and have not had a losing season since, even winning the national championship in 1992. The story was dramatized in a 2006 movie starring Matthew McConaughey called “We Are Marshall”. 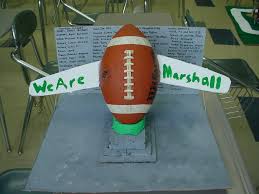