Growing up I remember regularly being told how modern art was supposed to challenge the sensibilities of mainstream society. It was the artist’s job to make us look at things from a different perspective, even if it made us uncomfortable. Peruse the collection of any modern art center and you will find works that will make just about anyone uncomfortable.

But now things have changed. If you belong to one of the countless sub-groups of society that have sprung up recently, you apparently have the right not to be offended, even by the art world. And if your particular sub-group has a history of being mistreated by mainstream society, artists dare not do or say anything to bring up those old wounds that never seem to heal.

This was never more on display than in the events leading up to the grand re-opening of the Minneapolis Sculpture Garden. One of the new pieces that had been installed in the garden was offensive to a group that clearly does not consider itself part of mainstream society. It does not matter what piece it was or which sub-group was offended, the scenario played out in predictable fashion:

When they found out about it, the sub-group made a lot of very public noise about the pain that this work of art was causing.

The media picked up on the story and ran with it.

The powers that be at the Walker Art Center and the Minneapolis Park and Recreation Board, the entities that are in charge of the sculpture garden, became very concerned about the potential ramifications if they left the work in place.

High-level meetings of all the parties involved were held.

Even though the grand re-opening had to be postponed, the offending work was removed and placed in the care of the offended party who initially said they would destroy it but now are taking the time to consider their options.

The folks who were responsible for letting the offending artwork see the light of day issued some very heart-felt, public apologies.

A new work of art that could not possibly offend anyone was quickly located and installed in the place where the offending piece had been. (This, I believe, is what they came up with in place of the offending work of art. They were still putting the finishing touches on it the day before the grand re-opening and I don’t see how anyone could possibly be offended by this glorified jungle gym): 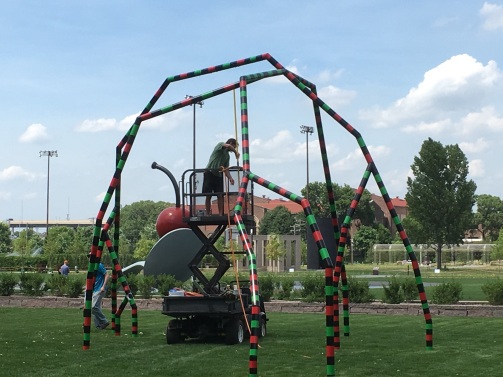 Those who still believe in free speech in the form of art, even if it offends people, point out that this kind of censorship sends a chill over the artistic community.

New procedures were put in place for selecting future works of art for the sculpture garden.

Now I agree not all art work is appropriate for public settings. There have to be some standards. A good place to start is to determine if the artist is intentionally trying to offend people or is just hoping to educate and challenge the way people think.

And how far are we going to let the subdividing of our society go until we say, let’s talk more about what we have in common than what divides us?

Having said all this, it’s still very much worth the trip to see the newly refurbished Minneapolis Sculpture Garden.

If you would like details about this controversy check out the following links: